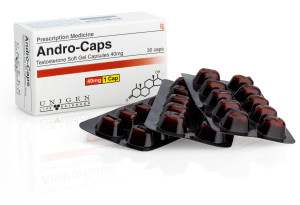 The esterification of testosterone at the 17β-hydroxy position makes the molecule hydrophobic and extends its duration of action. When administered in Oleic acid Testosterone Undecanoate is absorbed through lymphatics, by passing portal system considerable variability in the same individual on different days and among individuals. The longer the side chain, the greater the hydrophobicity of the ester, and the longer the duration of action.

Testosterone is absorbed from the gastrointestinal tract, the skin, and the oral mucosa. In addition, the basic molecule of testosterone has been modified to produce orally active compounds and to extend the duration of action. Alkylation of the 17α position produces compounds that are more slowly metabolised by the liver, and hence may be administered orally. Esterification of the 17β hydroxyl group increases lipid solubility and results in slower systemic absorption following intramuscular injection. The rate of absorption of the esters is related to the size of the ester group. Testosterone esters are hydrolysed to testosterone after absorption. Testosterone is about 80% bound to sex-hormone binding globulin. Derivatives of 19-nortestosterone and 17- α-methylated compounds have reduced binding to this globulin. The plasma half-life of testosterone is reported to range from about 10 to 100 minutes. It is largely metabolised in the liver via oxidation at the 17-OH group with the formation of androstenedione, which is further metabolised to the weakly androgenic androsterone and inactive etiocholanolone which are excreted in the urine mainly as glucuronides and sulfates. About 6% is excreted unchanged in the faeces after undergoing enterohepatic recirculation. Testosterone is converted to the more active dihydro testosterone in some target organs by 5α-reductase. 19-Nortestosterone derivatives appear to be less susceptible to this enzyme. Small amounts of testosterone are aromatised to form oestrogenic derivatives, particularly oestradiol. Compounds with a saturated A-ring, such as Mesterolone, appear to be less likely to be aromatised to oestrogen.

The primary indication for androgens, such as testosterone or its esters, is as replacement therapy in male hypogonadal disorders caused by either pituitary or testicular disorders or in hypogonadism following orchidectomy. Androgens and anabolic steroids have sometimes been used with oestrogens in the management of certain menopausal disorders, but the use of androgens and anabolic steroids in women with osteoporosis is no longer advocated because their adverse effects essentially outweigh any benefit they may produce.

To ensure absorption, Testosterone Undecanoate soft gelatin Capules 40 mg must be taken with a normal meal, if necessary with a little fluid, and be swallowed whole without chewing. It is preferable that half of the daily dose be taken in the morning and the other half in the evening. If an uneven number of capsules is taken daily, the greater part should be taken in the morning.

Pregnancy
Breast feeding
Known or suspected prostatic or mammary carcinoma;
History of liver tumours
Hypersensitivity to the active substance or to any of the excipients.

Testosterone and other androgens and anabolic steroids have been reported to enhance the activity of a number of drugs, with resulting increases in toxicity. Drugs affected include ciclosporin, Levothyroxine, and anticoagulants such as warfarin. Resistance to the effects of neuromuscular blockers has also been reported. As androgens and anabolic steroids can alter glucose metabolism, doses of insulin or oral antidiabetics may need adjustment.

Testosterone and other androgens may give rise to adverse effects related to their androgenic or anabolic activities. These include increased retention of sodium and water, oedema, hypercalcaemia, and impaired glucose tolerance. Other effects include increased low density- lipoprotein cholesterol, decreased high-density- lipoprotein cholesterol, increased haematocrit, and suppression of clotting factors. Androgens may cause headache, depression, and gastrointestinal bleeding. It has been suggested that androgens may induce sleep apnoea in susceptible patients. Abnormal liver function tests may occur and there have been reports of liver toxicity including jaundice and cholestatic hepatitis. There have also been reports of peliosis hepatis and hepatic tumours in patients who have received high doses over prolonged periods. These adverse hepatic effects have occurred primarily with the 17α-alkylated derivatives (e.g. methyltestosterone, stanozolol). In men, large doses suppress spermatogenesis and cause testicular atrophy. Epididymitis and bladder irritability can occur. Priapism is a sign of excessive dosage and may occur especially in elderly males. Gynaecomastia may occur. Androgens may cause prostatic hyperplasia and accelerate the growth of malignant neoplasms of the prostate. Continued use produces symptoms of virilism, such as hirsutism or male-pattern baldness, deepening of the voice, atrophy of the breasts and endometrial tissue, oily skin, acne, and hypertrophy of the clitoris. Virilisation may not be reversible, even after stopping therapy. Large and repeated doses in early puberty may cause closure of the epiphyses and stop linear growth. Children may experience symptoms of virilisation: in boys there may be precocious sexual development with phallic enlargement and increased frequency of erection, and in girls, clitoral enlargement. Gynaecomastia may also occur in boys. Masculinisation of the external genitalia of the female fetus may occur if androgens are given during pregnancy. After transdermal application of testosterone, skin reactions may include irritation, erythema, allergic contact dermatitis, and sometimes burn-like lesions. Skin reactions are more common with patches that contain permeation enhancers. The anabolic steroids, because they generally retain some androgenic activity, share the adverse effects of the androgens described above, but their virilising effects, especially in women, are usually less. There have been reports of adverse psychiatric effects in athletes taking large doses to try and improve performance.

High doses of Testsosterone undecanoate soft gelatin Capsules 40 mg may cause gastrointestinal complaints due to the castor oil present in the capsule. Treatment consists of supportive measures.

Store in cool dry place below 30°C. Do not refrigerate or freeze.

A carton containing 3 blisters of 10 soft gelatin capsules each along with pack insert.