Unigex (Sildenafil tablets) is indicated for treatment of erectile dysfunction, being the inability to achieve the inability maintain a penile erection sufficient for satisfactory sexual performance. In order for UNIGEX to be effective, sexual stimulation is required. Sildenafil acts by inhibiting cGMP-specific “phosphodiesterase type 5” which regulates blood flow in the penis. 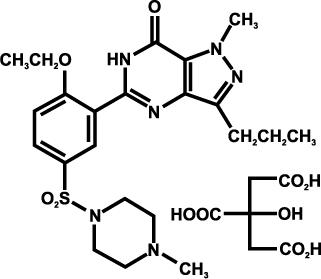 Unigex (Sildenafil tablets), oral tablets, contains Sildenafil
citrate 100 mg. Sildenafil citrate is a white to off-white
crystalline powder with a solubility of 3.5 mg/ml in water
and a molecular weight of 666.7.

Pharmacodynamics
The physiologic mechanism of erection of the penis involves release of nitric oxide (NO) in the corpus cavernosum during sexual stimulation. NO then activates the enzyme guanylatecyclase, which results in increased levels of cyclic guanosine monophosphate (cGMP), producing smooth muscle relaxation in the corpus cavernosum and allowing inflow of blood. Sildenafil has no direct relaxant effect on isolated human corpus cavernosum, but enhances the effect of nitric oxide (NO) by inhibiting phosphodiesterase type 5 (PDE5), which is responsible for degradation of cGMP in the corpus cavernosum. When sexual stimulation causes local release of NO, inhibition of PDE5 by Sildenafil causes increased levels of cGMP in the corpus cavernosum, resulting in smooth muscle relaxation and inflow of blood to the corpus cavernosum. Sildenafil at recommended doses has no effect in the absence of sexual stimulation. Studies in vitro have shown that Sildenafil is selective for PDE5. Its effect is more potent on PDE5 than on other known phosphodiesterases (10-fold for PDE6, >80-fold for PDE1, >700-fold for PDE2, PDE3, PDE4, PDE7, PDE8, PDE9, PDE10, and PDE11). The approximately 4,000-fold selectivity for PDE5 versus PDE3 is important because PDE3 is involved in control of cardiac contractility. Sildenafil is only about 10-fold as potent for PDE5 compared to PDE6, an enzyme found in the retina which is involved in the phototransduction pathway of the retina. This lower selectivity is thought to be the basis for abnormalities related to color vision observed with higher doses or plasma levels.
In addition to human corpus cavernosum smooth muscle, PDE5 is also found in lower concentrations in other tissues including platelets, vascular and visceral smooth muscle, and skeletal muscle. The inhibition of PDE5 in these tissues by Sildenafil may be the basis for the enhanced platelet antiaggregatory activity of nitric oxide observed in vitro, an inhibition of platelet thrombus formation in vivo and peripheral arterial-venous dilatation in vivo.

Pharmacokinetics
Absorption
Sildenafil is rapidly absorbed. Maximum observed plasma concentrations are reached within 30 to 120 minutes (median 60 minutes) of oral dosing in the fasted state. The mean absolute oral bioavailability is 41% (range 25-63%). After oral dosing of Sildenafil AUC and C increase in proportion with dose over the max recommended dose range (25-100mg). When Sildenafil is taken with food, the rate of absorption is reduced with a mean delay in T max of 60 minutes and a mean reduction in C of 29%. max.

Distribution
The mean steady state volume of distribution (V ) for Sildenafil is d 105 l, indicating distribution into the tissues. After a single oral dose of 100 mg, the mean maximum total plasma concentration of Sildenafil is approximately 440 ng/ml (CV 40%). Since Sildenafil (and its major circulating N-desmethyl metabolite) is 96% bound to plasma proteins, this results in the mean maximum free plasma concentration for Sildenafil of 18 ng/ml (38 nM). Protein binding is independent of total drug concentrations. In healthy volunteers receiving Sildenafil (100mg single dose), less than 0.0002% (average 188ng) of the administered dose was present in ejaculate 90 minutes after dosing.

Elimination
The total body clearance of Sildenafil is 41 l/h with a resultant terminal phase half life of 3-5 h. After either oral or intravenous administration, Sildenafil is excreted as metabolites predominantly in the faeces (approximately 80% of administered oral dose) and to a lesser extent in the urine (approximately 13% of administered oral dose).